Iceland is an island of unique and breath-taking landscapes, rich in culture and history, and phenomenal volcanic geology. Home to the world’s oldest parliament (the Alþingi), stunning National Parks and a unique music and art scene (celebrated the same weekend  as the Reykjavik Marathon) there is something to entertain anyone in Iceland.

What better way to discover any destination is there than running the streets of the city in a marathon? In summer 2022, the Icelandic capital can offer you the Reykjavik Marathon, Half Marathon, or 10 km. Held the same weekend as Reykjavik Culture Night, and with optional extras such as the incredible Golden Circle Tour (4 night package only), experience the Icelandic Capital in all its glory, with the Reykjavik Marathon and Sports Tours International.

Our friend, and founder of our sister company Sports Travel International, Martin Joyce, discovered Reykjavik for himself in 2019. He had no idea what to expect when he travelled to the Icelandic capital for the first time. He recounted his memorable experience at the Reykjavik Marathon for us… 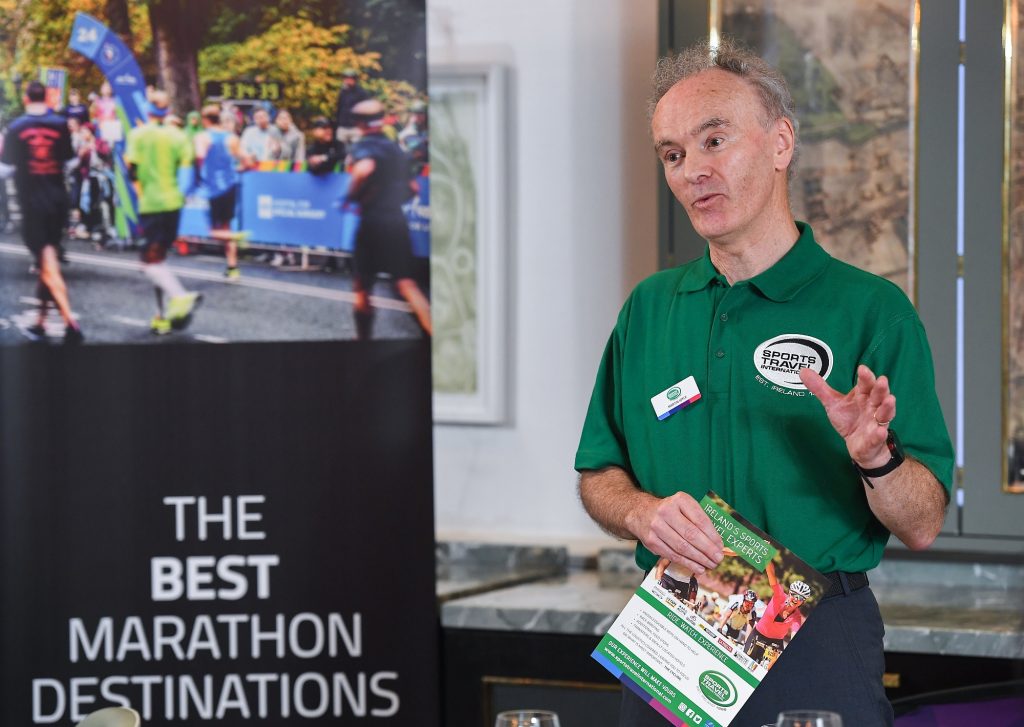 The large sign on the way to the arrivals hall at Keflavik airport was enticing. ‘Exit to Iceland’ it proclaimed. It radiated confidence and promised much for the 4 days in Reykjavik I had been looking forward to for months.

An efficient Flybus service brought me the 49km through an ancient, almost lunar, landscape to Reykjavik bus station. After which an instant shuttle smart bus dropped me off close to my hotel, in the centre of the city, with the race start and finish literally just around the corner.

Next morning, one of my hosts, Inga, led me on a 6km jog around the scenic bay. The name Reykjavik itself translates to ‘smoky bay’. The first settler in Reykjavik, who had come from Norway some 1200 years ago, Ingólfr Arnarson, noticed the steam coming from the geothermal geysers, which are common in these (and other) parts of the island.

Inga pointed out landmarks, on our run, including an amazing sculpture, called Sun Voyager, of a Viking ship, and the impressive Harpa modern concert hall. It was remarkable to see the old juxtaposed with the new. Reykjavik is a modern city, yet it still retains a local feel and its history speaks to you. Icelanders are also very warm and unassuming.

A quick drive around the course later, by Inga’s colleague Saevar, had me well-prepared for the marathon the following day. The expo was fun and lively, and there was only a short queue to collect my number and the bright red race T-Shirt. After picking up a few protein bars and gels I was all set. 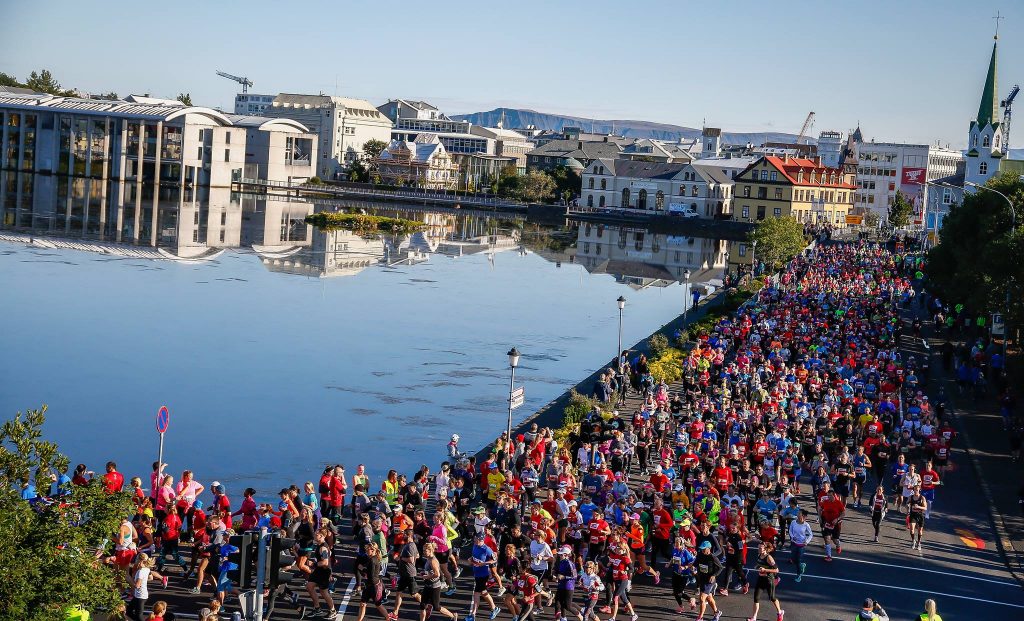 Breakfast started at 7 am, then there was time to relax, before a short stroll to the start at Laekjargata (meaning ‘stream street,’ as a river used to run  through it).

I was greeted there by pumping Scandinavian music and a laid-back air of calm expectation. The busy race HQ was in Menntaskolinn, a big school building overlooking the start and finish lines.

Ten minutes before the 8.40 am start, the pacers, with their backpacks and flags, eased into position, followed smoothly by the runners.

I was conscious that I had not done any substantial long runs, after cramping at 30km in the Dublin Marathon the previous October. There, I’d struggled  for the last 12km for a 4’35 finish. I said to myself, sub 5 hours will be grand here in the circumstances, but, if I’m honest, I wanted to do better. 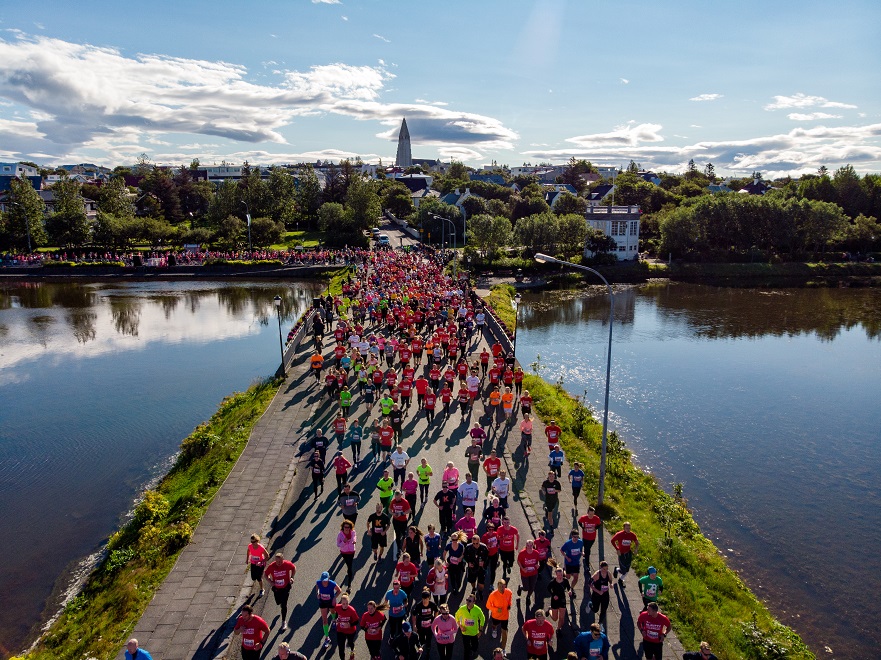 The full and half marathons started together (a 10k followed at 9.35) and immediately the sight seeing tour began, as we passed the unmistakable bulk of Harpa. After just over one km the race came alive. We turned into a residential street called Lynghagi, and the locals were there were waiting for us.

They were on their balconies whooping. One man was playing a trombone with gusto, another, down the road, was belting away on an accordion. Further on, were people singing a rousing tune. An entire family had brought chairs, a coffee table add two sofas on to the pavement. They cheered us on while they had their breakfast al fresco. They did not seem phased by the light drizzle in the slightest, or the cool temperature of around 8 C. It did warm up later to around 14 C.

It was like this for the first 7 miles. There were official cheer zones alternating with locals doing their level best to make the runners feel special and appreciated. And we did. It was all a touch surreal – and great.

The run along the bay was flat and scenic, till we got to 14 km. Here the course moved inland a little and became undulating. Then we turned back for 3km and, at 20km / 12 miles, we could see Harpa, and the city centre, once again. From there the half marathon headed to the finish. We, however, swung left into the deep heart of the outer city, with the national football stadium marking the halfway point. It said 2’09 on my Garmin; I was running easy and feeling good. 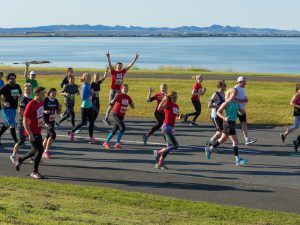 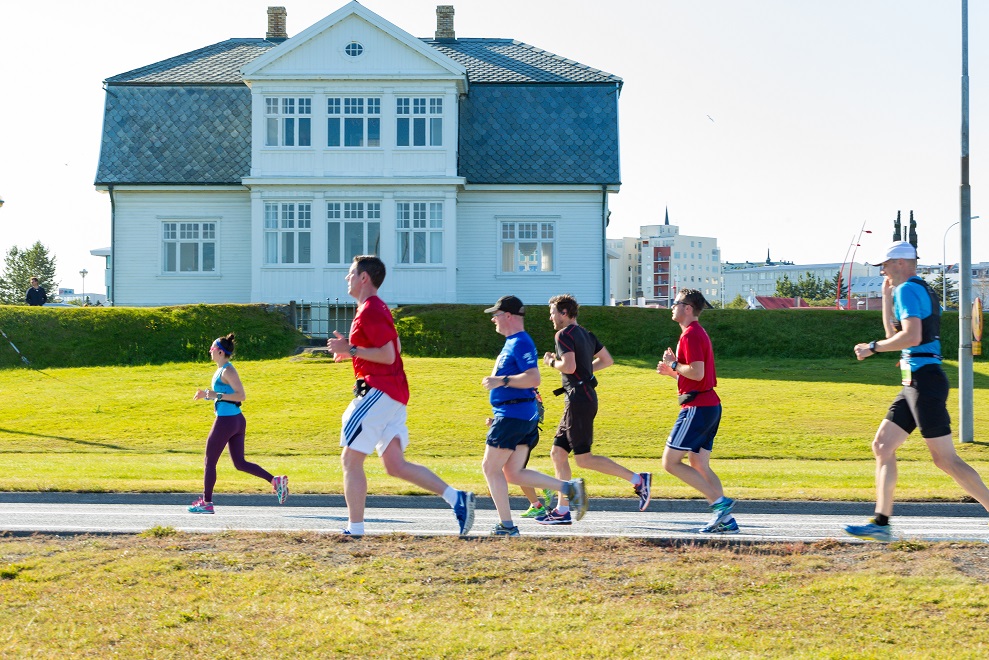 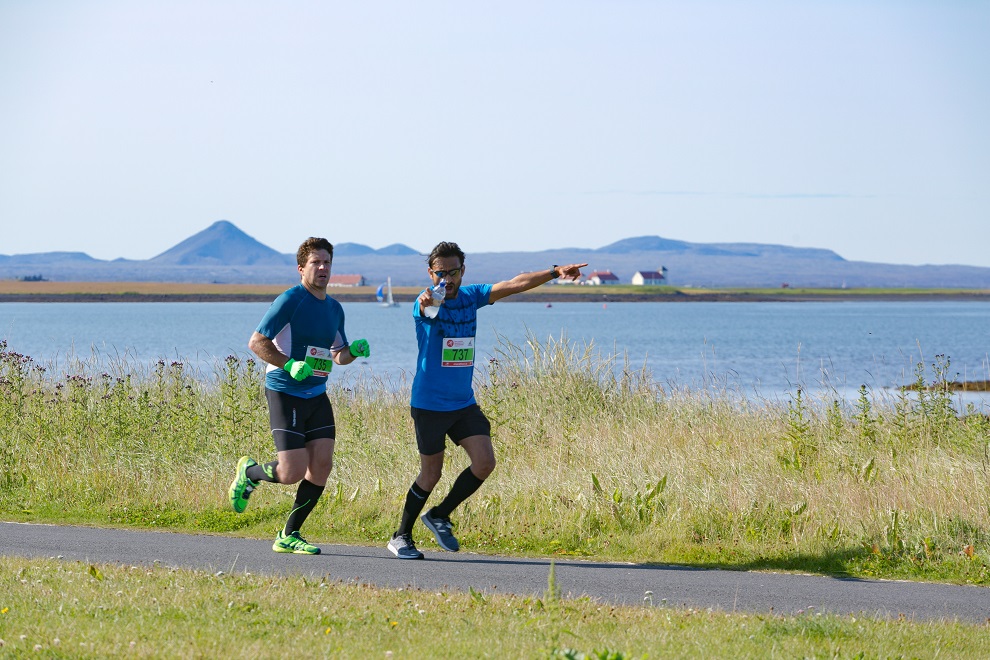 The second half of the race takes place in completely different terrain. A mix of suburban parks, residential estates, two river crossings, a flyover and an unexpected waterfall at 16.5 miles. Often the course snaked back on itself in twists and turns. ‘Come on Ireland’ shouted an Englishman, in three different locations, in the space of twenty minutes. I wonder how he did it.

The camaraderie among the runners was great. I spotted a dramatic black T-Shirt ahead with “Feck Off!” in large white letters and thought, it can’t be. But it was. The wearer stopped at the 17 mile drink station, so I did too. It turned out she was a 49-year old German lady called Imke, who was on her 10th Reykjavik Marathon. She had also run 5 Dublin Marathons as well. Her other passion was Mrs Brown’s Boys. She had been to the live show three times, hence the official T-Shirt.

Running steadily at 20 miles, an local runner came up beside me and we started chatting. His opening remark was –

“Do you see that house over there? “

– pointing to a neat townhouse –

We were going at a similar pace and so I stayed him, Jon Yngvi. He was 20 years my junior and running his first marathon. As we edged closer to the city centre, the route climbed, not too steeply, to the historic Barons Road (24 miles / 39km). This lovely street was lined with cheering spectators. Then it was a swing left, gently downhill, and a trot along the seafront past Harpa.

In the last 200m, I suggested to Jon Yngvi that we cross the line together. No doubt thrilled at finishing his first marathon, he responded by mustering a sprint and finished six seconds ahead of me!  My chip time was 4’24, well inside my 5 hour target. I also noted, with a laugh later, that it was quicker than his.

The finish line experience was excellent, a thermal blanket, food and drink, a little park with benches to sit down for a few minutes, and then just a few minutes walk back to the hotel. 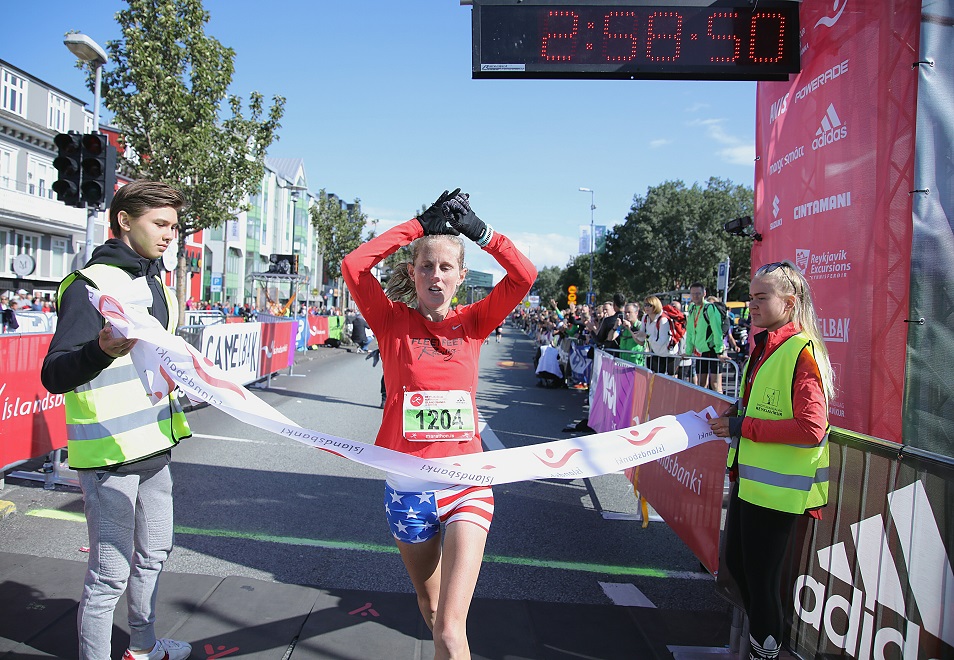 On Sunday I spent the whole day on the highly enjoyable Golden Circle Tour, taking in Thingvellir historic park where the world’s first parliament held court , in the open air, over 1,000 years ago. I also saw the famous Gullfoss Waterfall and Geysir thermal springs. It was the perfect end to the perfect marathon tour. 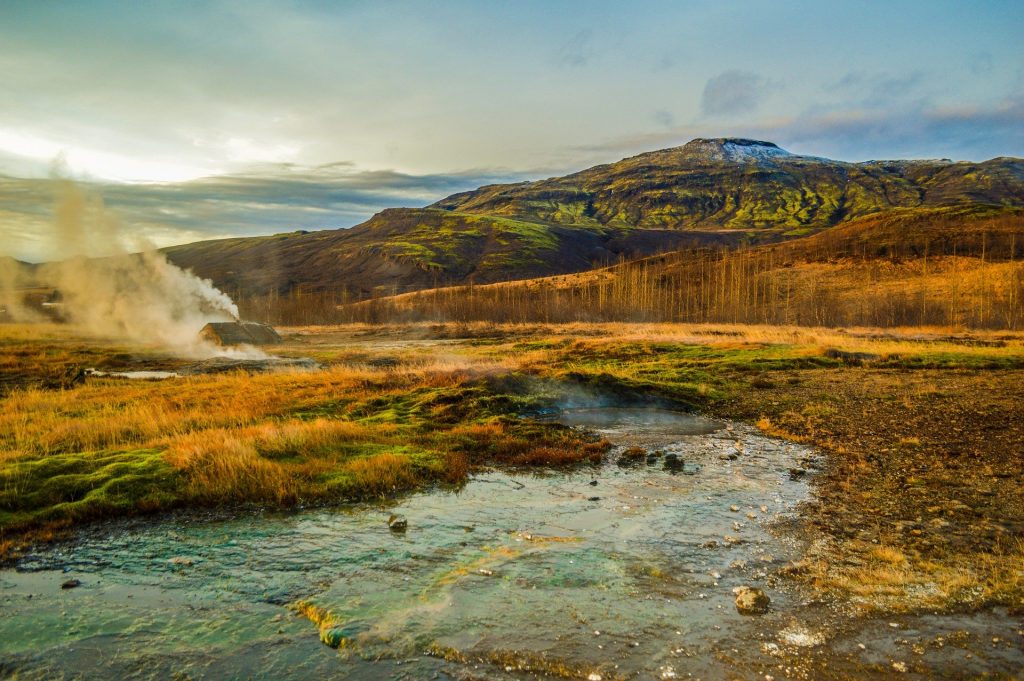 My trip was complete.

To find out more about the Reykjavik Marathon, or join our event wait-list, see our full event page HERE

Another brilliant day for our foundation @TheRunningBee at the Tour of Tameside! #tot22 twitter.com/tamesideradio/…