Home > New Records and New Rules at the Valencia Half Marathon

New Records and New Rules at the Valencia Half Marathon

This weekend, some of the world’s best endurance athletes lined up for the Valencia Marathon and Half Marathon. At perhaps the last major event of the 2020 season, the racing certainly did not disappoint. 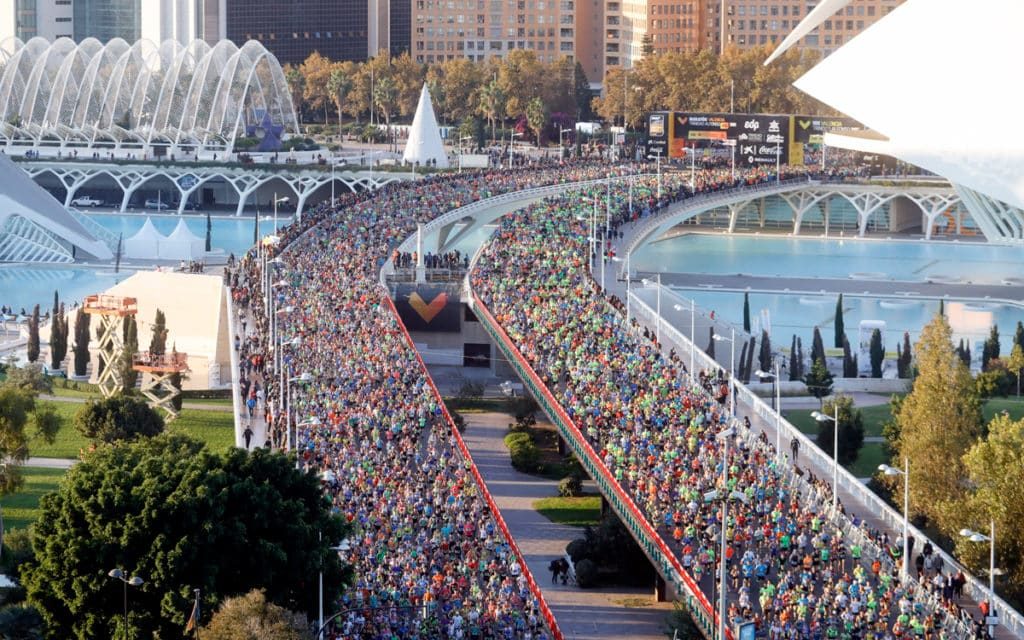 The half marathon race also sent sparks flying, as records came crashing down. Kibiwott Kandie of Kenya finished the race in an incredible 57:32. Taking some 29 seconds off the previous record, set by Geoffrey Kamworor at Copenhagen in 2019. The entire race was run at a tremendous pace, with the leaders passing 5 km at 13:37 and 10 km in just 27:25.

This incredible new record has shocked the world, smashing through the 58 minute barrier, at an average pace of just 4:24/mile (2:44/km)!

The previous world record of 58:01 was set by Geoffrey Kamworor of Kenya in 2019.

This new world record perhaps emphasizes the impact that technology is having on the latest wave of running world records. When he set the record, Kandie was wearing a new prototype shoe, the Adidas Adizero Adios Pros. The shoes contain 39mm foam as well as five tuned carbon-infused ‘energy’ rods that are designed to mimic the action of the metatarsals.

In the last few months alone, Joshua Cheptegei and Letesenbet Gidey have claimed new records (in the men’s 10000m and women’s 5000m) wearing the new Nike ZoomX Dragonfly spikes, claimed to be the fastest running shoe in the world. Mo Farah and Siffan Hassan have also both broken 1 hour run records in Nike prototype shoes.

This new record itself was set on the very day  that World Athletics allowed the use of prototype shoes in races (with the exception of World Athletics series and Olympic Games races). While many welcome the advances of technology, some have misgivings about the latest changes. There are some in the industrywho fear that, unless all athletes can access the same technology at the same time, there won’t be a level playing field.

“The solution,” claimed coach of gold medal winning heptathlete Jessica Ennis – Hill Toni Minichiello, “is to push back to the shoe companies to create and agree the rules and have to share their tech to level the playing field.”

Next year, both the Valencia Half Marathon, and the previous World Record course, the Copenhagen Half, will be part of the inaugural Superhalfs Series. The series consists of races in Valencia, Copenhagen, Prague, Lisbon and Cardiff. These are among the fastest and most popular half marathon races in the world. Test yourself against the world’s favourite race distance, on the half marathon trip of a lifetime with Sports Tours International!

Should prototype shoes be permitted in top level racing? Is it an exciting way to push boundaries, or does it give some runners an unfair advantage? Let us know your thoughts in the comments below…