Home > Il Lombardia finally has its own Gran Fondo

Il Lombardia finally has its own Gran Fondo

You can’t beat the excitement of a bike race, either as a cyclist or as a spectator. We offer a fantastic selection of exclusive hospitality access and VIP experiences on the 3 Grand Tours, the 5 Monuments of Cycling and some of the other big races on the 2018 UCI WorldTour cycling calendar.

The biggest events on the professional cycling calendar are the 3 Grand Tours and the 5 Mounuments:

The ‘race of the falling leaves’ will see the 2nd edition of the Gran Fondo Il Lombardia in 2018. Here we look at some of the main attractions of the route. 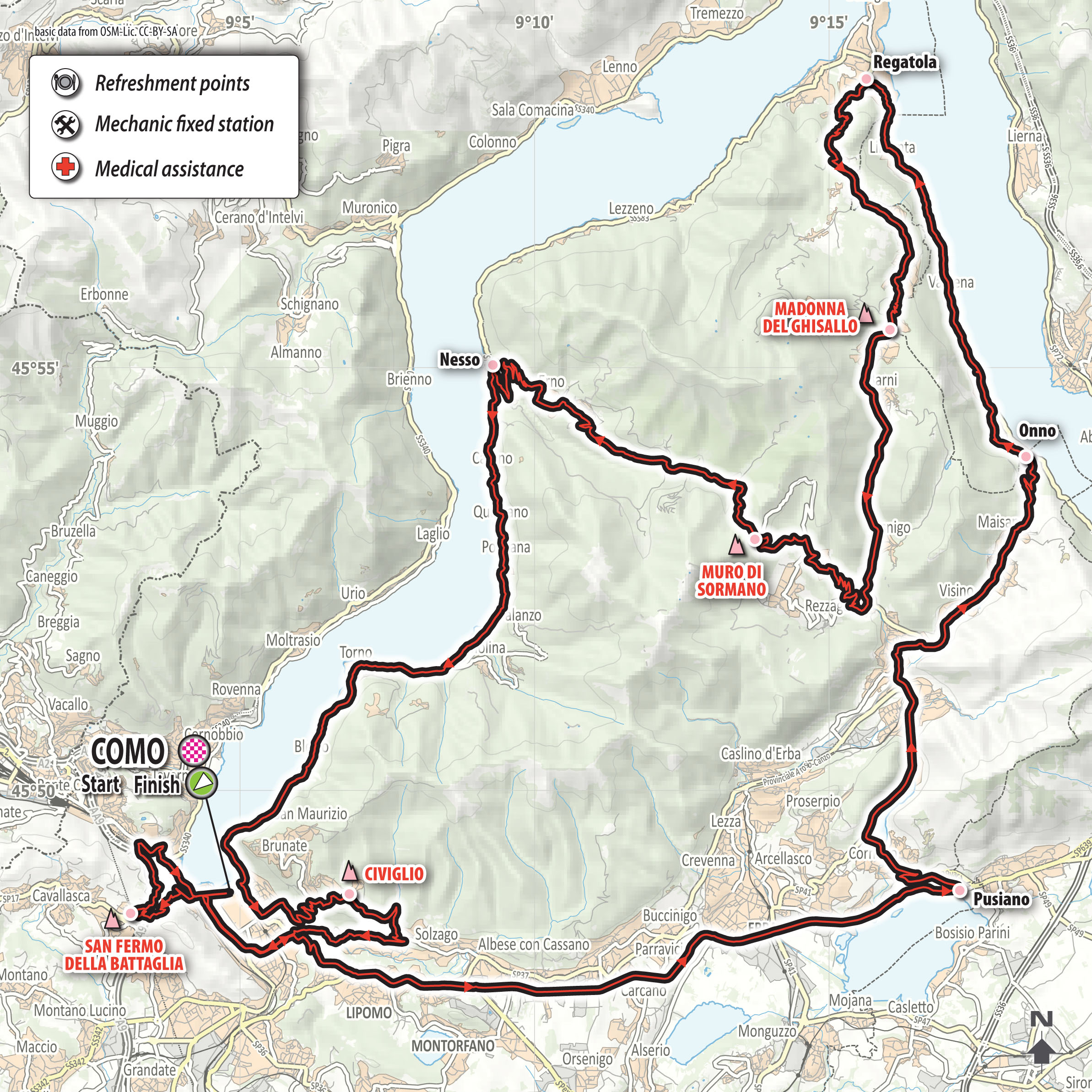 We are staying at the Hotel Borgo Antico on ths hores of Lake Como. This is a great location for registration, start and finish of the Gran Fondo Lombardia and also for the start of the Lobardia pro race on the Saturday.

Celebrated by Manzoni, Byron and Stendhal, Lake Como is considered as one of the most beautiful lakes in the world. Nowadays a major tourist destination, also for Hollywood celebrities such as George Clooney, the city and its surroundings are a major pole in the Italian silk manufacturing chain. Historically, it was the third city in Italy receiving a medal of honour for its contribution to Italian Unification, with reference to the battle of San Fermo in which Garibaldi led the Hunter of the Alps (Cacciatori delle Alpi) corps to defeat the Austrian forces, thus defending the city of Como. The city centre overlooks the eponymous lake. Rising in the historical district is the Cathedral of Santa Maria Assunta, the city’s Duomo, one of the major cathedrals in Italy. Its dome was designed by Sicilian architect Filippo  Juvarra. Every day, a cannon shot is fired at 12:00, marking noon for all the citizens. The shot can be heard throughout the city centre and the urban area. Main events include the traditional Sant’Abbondio festival, dedicated to the patron saint and celebrated every year on August 31, as well as the evocative Sagra di San Giovanni Battista. The latter is a historical re-enactment of the Mediaeval wars that were fought on Lake Como, which features a magnificent fireworks display and a lake cruise that sets sail in Como and takes passengers on a journey with live music and dancing.

Como has hosted six Giro d’Italia stage finishes, and it was finish city for the “Il Lombardia presented by NAMEDSPORT” classic several times. After hosting the start city of the 2016 “Il Lombardia presented by NAMEDSPORT”, in 2017 Como was finish city of the “classic of the falling leaves”. In line with tradition Como will host the start again in 2018.

The city of the Thousand, hence named after the many volunteer soldiers that committed to the cause of Italian Unification, led by Garibaldi, is divided into Bergamo Alta (the upper town), namely the historical district, and Bergamo Bassa (the lower town). The upper town (Città Alta) is one of the few towns in Italy whose centre is still entirely surrounded by walls. Piazza Vecchia is the heart of the city; main sights include the Contarini fountain, Palazzo della Ragione and the civic tower (Torre Civica). Major landmarks also include the Colleoni Chapel, one of the many monuments in Bergamo dedicated to Bartolomeo Colleoni, a famous warlord who was born in Solza, on the bank of the Adda River. By the end of his career, he had become captain-general of the Army of Venice. This was a land of warlords and a land of Popes too, with John XXIII, known as “the Good Pope”, who was born in Sotto il Monte, nearby. A number of characters of Italian Comedy are “native” to this area, too, the most famous of which being Arlecchino (Harlequin) and Gioppino. Bergamo was hometown to many football stars (both the former coach of the Italian national team Donadoni and Giacinto Facchetti were born here) and cycling champions such as Felice Gimondi – Tour de France, Giro d’Italia and Vuelta a España winner – and Paolo Savoldelli, an unstop-pable downhill racer, dubbed the “hawk from Bergamo” (who was born in Clusone, nearby). Ivan Gotti and Beppe “Turbo” Guerini, both of whom scored major achievements in top races, were native to the area, too.

The Ghisallo climb is a historical passage of “Il Lombardia presented by NAMEDSPORT”, and is often decisive for victory in RCS Sport’s autumn classic. It will be part of the route in 2018, too, and was also featured in several Giro d’Italia stages. The Ghisallo will be the highlight of the race, along with the “Muro di Sormano”.

On top of the climb stands the sanctuary of Madonna del Ghisallo, a “pilgrimage destination” for a number of cyclists and enthusiasts. The Ghisallo Sanctuary is also home to a cycling museum, featuring a wide range of valuable relics donated by cycling champions, including a number of yellow, pink and rainbow jerseys, as well as Moser’s hour-record bicycle. A statue dedicated to two icons of Italian cycling, Coppi and Bartali, stands in the Sanctuary square, and it is often used as photography “backdrop” by cyclists and amateurs who reach the Ghisallo summit. 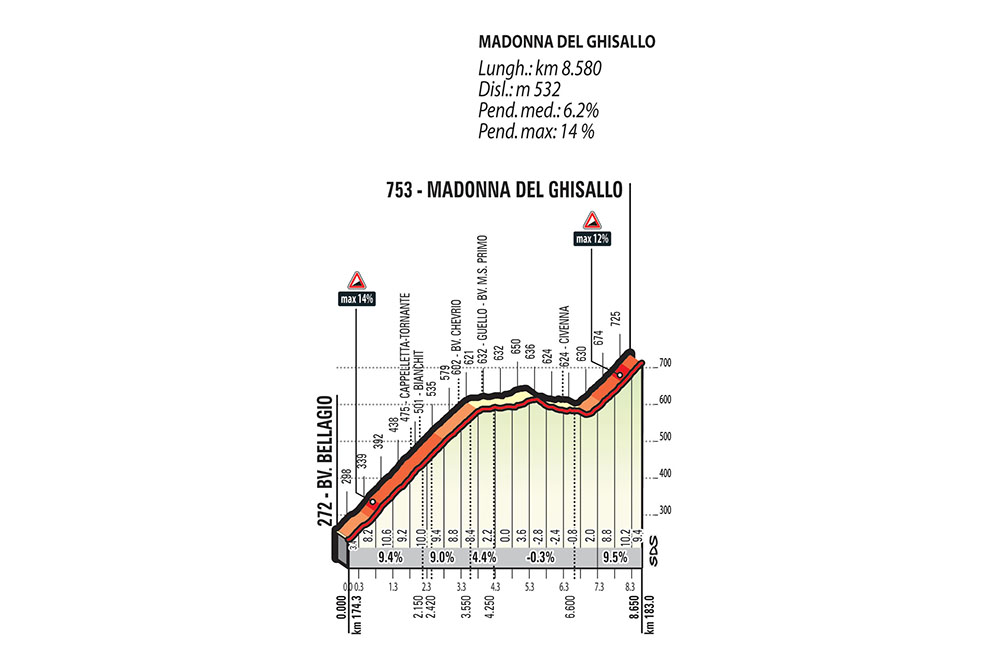 The “Muro di Sormano”, also referred to as “the world’s toughest climb” by cycling enthusiasts, is one of the iconic and most famous climbs of “Il Lombardia presented by NAMEDSPORT”, along with the “Madonna del Ghisallo”. It was first inserted in the route back in the 1960s to make the race even more challenging, but was then dismissed, only to make its comeback in 2006 after the old road surface was replaced with a new tarmac layer. The climb is as spectacular as it is challenging, for its incredibly steep gradients. Each metre is numbered, and elevation is marked to provide riders with consistent reference points as they make their way to the top, between the crowds lining the road.

📣Last availability for the 2022 TDF Final day in Paris!📣 Enjoying all the of #TDF2022 action so far?🚴 You could still experience the spectacular finale on the iconic Champs Elysees in Paris on July 24th!🤩🇫🇷 Find out more👉ow.ly/18UJ50JQJxv #TourDeFrance #TDF #TDF22 pic.twitter.com/TqQntpxqHd

About 2 hours ago from Sports Tours International's Twitter via Hootsuite Inc.

When running in Berlin, you can expect cheering crowds as well as live music to keep your mind off your aching limbs🏃‍♀️🥁. In addition to being an unmissable marathon, it's also a fantastic city full of history!🇩🇪🏛️ #BMWBerlinMarathon #runforjoy #berlinlegend #abbottwmm pic.twitter.com/Ykm65ZC0Q1

And breathe!😮‍💨 After a very busy and fun-filled weekend at some of our fantastic cycling events, our customers are on their way home and our reps are recovering before they embark on next one!🚴 Next stop: L'Étape du Tour this Sunday📍🇫🇷 #TourdeFrance #TdF #maratona #maratona pic.twitter.com/1Kf494Fzsl

The ballot for The Bank of America Chicago Marathon might have closed 7 months ago, but you can still GUARANTEE your place at the 44th running of the event🏃✅ 📷: @ChiMarathon #ChicagoMarathon #AbbottWMM pic.twitter.com/lj37LSADlP