VIP hospitality on every stage

Exclusive VIP access and hospitality to the 2021 Tirreno Adriatico on every single stage. Also known as the “Race of the Two Seas” Tirreno Adriatico is a stage race across 7 stages between the Tyrrhenian and Adriatic coasts in the early part of the 2021 UCI World Tour cycling season.

The TTT route comprises two virtually straight sectors, rolling along the two lanes of the same road, on the Camaiore-Forte dei Marmi seafront. Halfway, the route takes a “square turn” around a block. For the fifth consecutive year Lido di Camaiore will host the start of the Tirreno-Adriatico NamedSport.

Lido di Camaiore is one of the most popular and best-equipped seaside resorts in Europe. Its lovely golden sand beach, stretching between Marina di Pietrasanta and Viareggio, is washed by the Ligurian Sea. The city is conveniently located to explore the charming Tuscan countryside, and is an excellent starting point towards the major tourist destinations and art heritage cities in Tuscany and Liguria. The elegant promenade, lined with beach resorts, restaurants and shops, is the hallmark of the town, and the iconic Bellavista Vittoria pier offers a stunning view over the Tyrrhenian Sea and the Apuan Alps, just behind. Sports enthusiasts will love the many beach activities and the long cycle track running from Viareggio to Forte dei Marmi. The hilly inland area is a major destination for hiking, biking and horse riding among the lush greenery, while the mountains (within short driving distance) offer a variety of routes. Lido di Camaiore has often been Giro d’Italia finish city in 1997, in 2002 and in 2007, and currently hosts the opening stage of the Tirreno-Adriatico.

The stage starts uphill, taking in climbs up Montemagno and Pitoro over its opening kilometres. A long flat stretch follows, leading all the way to the final undulations. The route passes through Castellina Marittima, Riparbella, Montecatini Val di Cecina and Volterra (including their respective climbs), up to the final ascent leading to Pomarance. The stage is made for finisseurs, and GC contenders should keep an eye on them. It’s the third time the stage starts in Camaiore and finishes in Pomarance: the 2016 stage winner was Zdenek Stybar, followed in 2017 by Geraint Thomas.

Camaiore lies at the heart of Versilia, a charming region with long-established traditions, and has a varied landscape. Only a few other places on earth can boast such a combination of contrasting yet harmonising sceneries: from the heights of the Apuan Alps to the gentle rolling hills, dotted with lovely villages, to the beaches in Lido di Camaiore.

The customs and traditions of the city, such as the sawdust carpets and the oil-lamp procession commemorating the death of Jesus, made it a major tourist destination. Camaiore has a typical chessboard layout, and is surrounded by defensive walls. Major landmarks include the famous Collegiate church and the Benedictine Abbey. The town bursts into life especially in the summertime, offering a wealth of tourist attractions. The Palio takes place in June and in July, with the six town’s districts challenging each other in a set of athletic and entertaining competitions. The town of Camaiore is also known to sports and cycling enthusiasts for the historical “Gran Premio Città di Camaiore”, which was raced from 1949 to 2014, while in recent years it has become a permanent feature of the Tirreno-Adriatico route.

Lying in inland Tuscany, the town of Pomarance hosts a wide range of ancient and modern tourist attractions, including a museum dedicated to geothermal science (Museo della Geotermia) in Larderello, leading visitors to discover the strength of nature in the surrounding territory, and the ways mankind has tried to harness this energy. The territory of Pomarance is home to the so-called Valle del Diavolo (the Devil’s Valley), which is said to have served as inspiration for the landscapes in Dante Alighieri’s Inferno. The tall columns of white steam are actually due to a natural phenomenon (boric-acid fumaroles).

The route is initially wavy, and becomes increasingly flatter as it approaches the finish. This long stage follows the constant undulations of the territory of Siena, including Passo del Rospatoio, enters Umbria through the Trasimeno plain and brushes by Assisi and Spello, all the way to the final sprint around the walls of Foligno. Foligno will host the arrival of a stage of the Race of the Two Seas for the fourth time.

Lying halfway between the more renowned Perugia and Assisi, Foligno is an excellent destination worth discovering. Piazza della Repubblica, the true heart of the city, features an outstanding architectural “ensemble” comprising the Duomo, the Town Hall and Palazzo Trinci. The Duomo, dedicated to the patron saint of the city, St. Feliciano, is Neoclassical-Baroque in style. The Museo Capitolare Diocesano and the Crypt, inside the cathedral, are definitely worth a visit. Neoclassicism also inspired the 13-century Town Hall and crenelated tower. Rising near the Duomo is Palazzo Trinci, housing the city’s art gallery (Pinacoteca). Completed in 1407 and restored in 1949, the building has a neoclassical façade and a stunning Gothic staircase. Palazzo Orfini, nearby, was the former abode of Emiliano Orfini, the typographer who printed the first Italian edition of the Divine Comedy, and has an amazing 16-century gate. Parco dei Canapè, surrounded by the ancient city walls, between Porta Romana and Porta Todi, is the perfect choice if you are looking for a place to unwind. Local cuisine offers a wealth of traditional Umbrian delicacies such as spaghetti con il rancetto (a sauce made of pancetta, tomatoes and marjoram) and “rocciata”, a local rendition of the apple strudel with nuts, cocoa and alchermes liqueur.

This stage, together with the following one, are the hardest of the race. Starting from Foligno, the route follows a wavy but uncomplicated course and then brushes by Fossombrone. Here, the route takes in a series of walls, with a variety of challenging gradients, on narrow roads across the Marches valleys, all the way to the double closing circuit. It includes a double pass over the Muro dei Cappuccini, just 5.7km from the finish in Fossombrone. This is the first time Fossombrone hosts the finish of a Tirreno-Adriatico NamedSport stage. 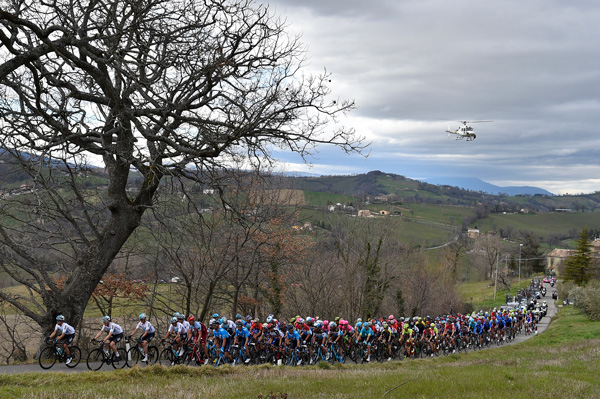 The peloton will be confronted with the iconic ‘muri’ of Recanati. Starting from Colli al Metauro and covering a semi-circuit through Saltara, Calcinelli and Lucrezia, the stage then follows a mostly flat route all the way to Recanati. Past Loreto, the route will take in nine consecutive climbs, some steep, others more gentle. A final 22.3km circuit, to be covered three times, features two leg-sapping walls (the one closest to the finish is especially tough, with gradients of around 18%). Recanati will host the arrival of a Tirreno-Adriatico NamedSport stage for the second time after the Macerata-Recanati ITT in 2008, won by Fabian Cancellara on his way to GC victory. 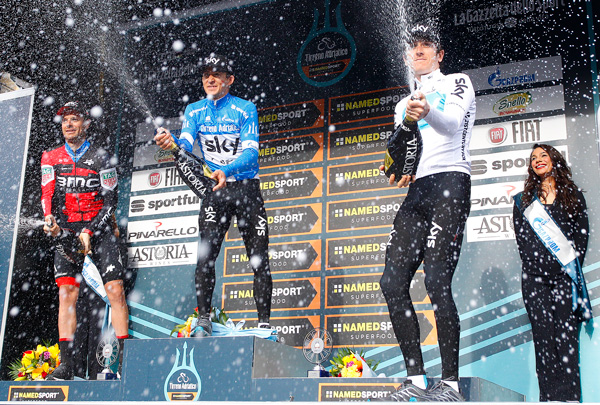 Despite its wavy and bumpy start, this stage is made for sprinters. Starting in Matelica, the route covers a short semi-circuit then heads for Castelraimondo and San Severino Marche. After the Valico di Pietra Rossa climb, towards Cingoli, the route levels out and leads all the way to Jesi, to cover three laps of the final 12.3km circuit. Jesi is hosting the Tirreno-Adriatico NamedSport for the first time.

The route of this 10,050m Individual Time Trial mainly follows the final circuit of the conclusive stages of the late 1990s and recent 2000s editions, and is the same as featured since 2015. The last 2.5km are on an almost entirely straight route. This is a longstanding tradition for the Race of the Two Seas: San Benedetto del Tronto will host the end of the race for the 53rd time in 54 editions – only the very first edition of Tirreno-Adriatico in 1966 did not conclude there: the final stage was the San Benedetto del Tronto-Pescara.

An oasis of palms and greenery and a Blue-flag winning sea, paired with top-quality tourist reception facilities, fabulous food, a lovely climate, leisure activities for children, a bustling nightlife, sports and culture. San Benedetto del Tronto is all of this – and much more. The seafront is the city’s crown jewel: stretching four kilometres, it is considered one of the most beautiful promenades in Italy. The port, one of the most important ones in Italy, also has a large tourist harbour. San Benedetto started to develop in the late 19th century, following the construction of the Adriatic Railway and the creation of the first beach resort. Since then, San Benedetto del Tronto has been thriving around the sea, which is its source of economic and cultural wealth. Fishing has moved from contributing to people’s livelihoods to being the mainstay of local economy. At the same time, tourism has grown remarkably, intensely and unstoppably, and San Benedetto del Tronto has become the first city in the Marches region in terms of hotel stays. The popular “brodetto alla sambenedettese”, a fish stew with bell peppers and vinegar, which makes it different from any other recipe, is a must-taste in local cuisine. It has been a one of a kind since forever, and just a spoonful of it will take you back in time.

All of the runners who participate in the 2022 Sanlam Cape Town Marathon will have guaranteed entry to the race once it secures the status of Abbott World Marathon Major⭐. Who’s taking on the challenge this year? 📷: @capetownmarathon #SanlamCapeTownMarathon #AfricasFirstMajor pic.twitter.com/FjfuKgs2F5

Club La Santa UK, part of the Sports Tours International Group, is hiring a Reservations Clerk based in Manchester. This role involves looking after clients & helping to secure their reservation☀️✈️ If interested, send your CV to rebecca.fryer@sportstoursinternational.co.uk pic.twitter.com/3LHccmpt1J

Over the past 10 years Robert Pullan raised nearly £8,000 for charity. His Mum whom he lost in 2011 was his inspiration and focus when training. "I started running in her memory and I know I will have done her proud".🏅 What's your WHY? #sixstarfinisher #WMMajors #bostonmarathon pic.twitter.com/lXMEInvaLv

Community is at the heart of what we do🤝We strive to create a welcoming environment for all of our runners & cyclists, with our friendly reps, celebratory drinks post- event, and our twin-to-share option🙌 You’ll never be alone with team Sports Tours💙 #MentalHealthAwarenessWeek pic.twitter.com/RUT0dNGH8t